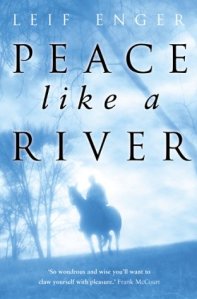 I learned about Leif Enger through Abraham and John Piper’s recommendations of his first novel, Peace Like a River. It didn’t disappoint. The narrator’s father is one of my favorite characters ever, an Old Testament prophet dropped into the Midwest in 1962. (Read the excerpt in JP’s post to see what I mean.)

Enger’s second book is So Brave, Young, and Handsome. 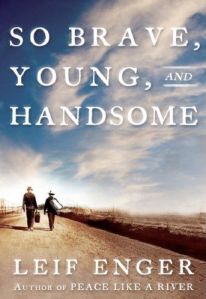 With both second books and second albums, there’s always the worry that it’ll just be a retread, but I thought Enger avoided that well. Of course there are common elements, but it’s a different story told with a different voice.

Enger’s characters are mysterious and endearing. You get the sense that there has to be a back story, but you don’t get it– you’re just dropped in where he wants you. Where he wants you is somewhere out West in a world that doesn’t exist anymore, except that you feel it does when you’re reading Enger. You don’t have the feeling that it’s 2009 and you’re reading a story about a different time, but really that you’re embedded in that time. And his use of language is sriking and skillful– each sentence can stand on its own, just the right words for its purpose.

You could say that both of these stories are about developing manhood– one in a boy and one in a grown man. Enger portrays manhood well, and in a world that’s trying desperately to forget what manhood even is, that’s exciting.