James-Michael replies to my last post on his blog. Posted here as well. With a graphic that’s funny, and apparently even funnier if you’ve seen Anchorman. (I don’t think JMS’s putting Driscoll in pink was an accident.) 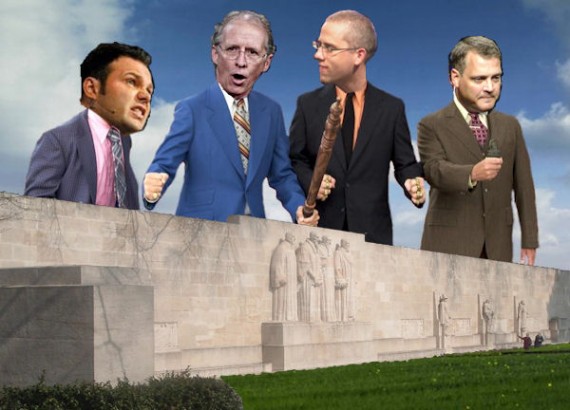 In the first part of this discussion, my good friend and Reformed Pastor, Jake Hunt, stated two primary points (which he clarified in the comments section as well):

Two points I’m trying to make here are 1) This [i.e. “jerkishness” is more a characteristic of the blogosphere than it is of the Reformed world and 2) In some cases, the leaders of the non- or anti-Reformed crowd are guilty of the same kind of inflammatory language they decry from no-name commenters on the other side.

I want to begin by saying that I appreciate Jake’s response and I always enjoy our back-and-forths precisely because he is articulate and well-informed and often pushes me to think more clearly and carefully on whatever it is we are discussing. This recent response is no exception.

Firstly, Jake, I agree that not all YRR folks are jerks (YRR is the abbreviation I’m using for the Young Restless Reformed crowd in general; particularly those who most strongly resonate with the works and teachings of John Piper, Mark Driscoll, Kevin DeYoung, Al Mohler and others affiliated with the Gospel Coalition, etc.). In fact, I would argue that MOST of them are not. Most are God-loving brothers and sisters in Christ who I have great respect and affinity for.

However, when talking about any theological or social movement, it is unavoidable that there will be generalizations that do not hold true all the time. And it is such a generalization that is the main point in this discussion.

My thesis: As a whole, the YRR crowd has become known for being overly acerbic, critical and divisive in their approach towards those outside of Reformed theological circles.

The fact that we are having this discussion in the first place is exhibit A. Whether it’s warranted or not, what most of us who are not part of the YRR crowd feel is that the YRR crowd defines itself in relationship to other Christians primarily in terms of their differences. The recent “Bellgate” episode was merely the most high-profile example of such a reaction.

Of course the anonymity of the blogosphere only encourages keyboard heresy-hunting in its most rabid (and unchristian) forms…on all sides. I readily admit that and have always said it to be the case. The YRR crowd does not have a monopoly on mean-spirited and snarky critics of those with opposing views (I will address this second point of yours in my next post).

However, the YRR movement has characterized itself as a resurgence of a specific Christian theological tradition–namely, Reformed Complementarianism. This isn’t an outside mischaracterization, this is how some of its most well-known proponents frame the discussion, such as in this video discussion between Al Mohler, Kevin DeYoung and Ligon Duncan:

DeYoung, Duncan, Mohler: What’s New About the New Calvinism from The Gospel Coalition on Vimeo.

So while in the eyes of many YRR proponents it’s all about defending the Gospel, lifting up God’s sovereignty, contending for the faith once and for all entrusted to the saints, etc., to those of us who do not agree with, say the Synod of Dort or the Westminster Confession, or the various Baptist Confessions that the YRR crowd see as definitive for all good theology, it seems as if we are automatically deemed second-class Christians–at least in the area of theology and Biblical fidelity.

Of course not all Reformed thinkers reflect this, but it is the perceived view of the movement as a whole…to the point where even John Piper acknowledged its validity as a danger that the movement must face:

So that would be my flag, the danger of intellectualism. And maybe the danger of certain aspects of it becoming so argumentative or defensive that it becomes unnecessarily narrow. That is funny for me to say because I think I am a really narrow guy, and a lot of other people think so too. [emphasis mine]

Given that Piper himself recognizes this tendency, even in his own approach, and recognizes the danger inherent in it, I find it puzzling that he would not go out of his way–and encourage his fellow YRRs to do the same–to counteract this in his public teaching, speaking, blogging and yes, Tweeting.

So while I READILY acknowledge that all YRR adherents are not jerks, I don’t see how you could say that this tendency toward theological narrowness and exclusion of non-reformed views does not at least characterize the movement as a whole, even if those of you on the inside do not feel that it should. Whether deserved or not, the perception among those who are not YRR insiders is that it does. So the onus is on the YRR spokespersons to shepherd their flocks (both in the pews and online) in such a way that they make it clear that this is not what they are about.

I also don’t think it can be entirely blamed on the internet/blogging community (though they have made it much more prevalent than in prior times through the fact that ANYONE can say ANYTHING online and it can be found with the click of a button thanks to Google!). I say this primarily because many of the influencers within the YRR community were drawing such boundaries through books, conferences and national teaching ministries before the internet came on the scene. John Piper, R.C. Sproul and John MacArthur have been equating doctrinal orthodoxy with Reformed theology in their writings and speaking engagements for years.

I remember when I was a student up at Gordon-Conwell in Massachusetts the whole Openness Theology debate had just started gaining steam. As I learned about it and listened to its proponents (Boyd, Sanders, etc.) and its critics (Wells, Ware, etc.) I always found myself having to clarify my views to my peers, many of whom were convinced that Openness Theologians were heretics and should be driven out of Evangelicalism entirely. That response almost never came from non-Reformed students or teachers (though I believe Tom Oden has spoken pretty harshly against it in the past…which is surprising to me honestly). The response from most Arminians, for instance, was often along the lines of “well, I don’t agree with their conclusions and I think they misinterpret Scripture in a number of places; but they are asking valuable questions and they do seek to be faithful to the text of Scripture, so I appreciate that about their approach.” This is the approach that I longed to hear from my Reformed professors and colleagues, many of whom I greatly respected. But if there were such sentiments on any of their behalf it was drowned out by the loud cries of denunciation and warning of “false teachers.”

This was my experience at a seminary where Reformed scholars were in the majority within the theological and Biblical studies departments, but where there was open admiration and mutual respect between them and their non-Reformed colleagues. I can only guess how vehemently it was denounced at purely Reformed schools. Theological lines in the sand seemed to be the norm among many of my YRR classmates.

[Here’s an anecdote to illustrate my experience. It was my first year at GCTS and I was in the dining hall sitting with some of the guys on my hall. A 3rd year student who was friends with my roommate came and sat down and we were all talking about various seminary-nerd things. At one point in the conversation it came out that I was not Reformed. The 3rd year student looked at me and said somewhat jokingly/mockingly “So you’re an Arminian, huh? How in the world did you come to believe such Godless heretical nonsense as that??”  I smiled and replied “I dunno…I guess from reading Scripture in context.” It was as close to a “How ya like them apples?!” Good Will Hunting moment as one can have in the world of Bible geekery, I guess. We laughed about it and they never gave me crap for not being Reformed after that; but there was always an undercurrent of “Oh…he’s one of them…” whenever I discussed theology with my Calvinist friends and classmates. And that was at an inter-denominational seminary no less.]

So I don’t think it’s a stretch to say that the YRR movement was birthed from a discontent with the larger Evangelical community’s supposed lack of concern for doctrine on the part of many young Christians in the Reformed tradition (as DeYoung and Mohler admit in the video above). This discontentment has been expressed in ways that, to those of us outside the fold, appear smug and/or prideful (again, note Mohler’s incredibly uninformed or wildly naive “Where else can they go??” comment in the above video!).

Thus the YRR crowd in general bears a greater burden in showing the non-YRR Christian world that they are not in fact overly-critical, unnecessarily divisive and tend toward jerkishness at times.

Is that fair? Probably not.

But it’s a reality that we all inherit the reputation of those with whom we associate, regardless of that reputation’s actual merit. For instance, the reputation Methodists have among the wider Evangelical world is that we are not concerned with theology, particularly orthodox theology! I recognize this and admit it. But rather than saying it is undeserved or not true, I do what I can to write, teach, speak on and link to the best theological minds within the UM tradition and hopefully help bring about a change in that reputation through demonstrating its opposite.

This is something that I see few YRR proponents seeking to do when it comes to the reputation they have among those of us outside their ranks (however, there are a number who do…and whom I greatly admire because of it! Though I have YET to see a similar list of acknowledgement from any YRR thinkers, teachers, or bloggers. But I’d LOVE to be proved wrong on that one!). That’s why I appreciate this discussion with you, Jake. It gives us a chance to hash things out with cards on the table for all to see and no need to worry about hurting each others’ feelings or being divisive. I think that’s what all good rigorous theological discussion SHOULD do…and I’d love it if more such discussions could take place among YRR and non-YRR authors, preachers and scholars on a regular basis.

I will address your second point in a subsequent post, because I want to discuss the specifics of theological criticism and how it can and should be done without being mean-spirited, prideful or divisive (and how many on BOTH sides have failed miserably at this!), but for now I wanted to respond mainly to your first point.

Would you agree with this?

Blessings from this side of the Body,

ps: Being a huge Anchorman fan, I had fun making the image above to express the topic being discussed…namely whether or not the YRR leaders are ready at the drop of a hat to fight over their Reformed tradition (as symbolized by the Wall of the Reformation in the foreground). It’s supposed to be light-hearted and I welcome any such good natured parodies in response. Hopefully if any of the guys above see this image, they will be able to chuckle at it rather than be offended!